forums of the buzz

I found this using google shopping. I'm not familiar with the gaida boards. If it isn't available here you can maybe order it from abroad if you search ali baba or something.

Good luck on your quest! I've just replaced my msi z87i with an asus z97i plus to mitigate some rfi issues.
Top

Bit of an update:

I bought an Intel NUC i7 (NUC5i7RYH). It's very tiny. I put 16GB of RAM in it, a solid state drive and a hard drive. It runs very well, and both Buzz and Maschine work quite nicely on it (although the lack of dedicated line input sucks, so I'm currently using a Babyface external USB audio interface, which works great so far).

I've hollowed out (and sawed into) a GameCube chassis. The NUC innards should be able to fit, along with a slot-in blu-ray drive (with USB adapter, since there's only one SATA port), a USB hub and the original GC fan. Not sure if I'd be able to run the NUC on a battery, but I'll be looking into that eventually (I don't want to risk destroying it, so I'm waiting for someone else to try it first). I'll try to leave room for one in the chassis in case I decide to make that upgrade. I'll be using Lego and hot glue to put things in place inside. The glue will hold down the Lego, and the Lego will hold the other things in place. Screws where needed.

I also have a 7" touch screen. It's not very bright and the touch is a bit frustrating, but I've tested it and it works. I haven't quite figured everything out, but I figure I'll make a makeshift case for it out of Lego just to keep the controller board and everything in place. I might make some kind of contraption to attach it to some kind of mini keyboard thing. It's all loose prototype ideas at this stage.
Top

There'll be pics when there's anything worth taking pics of. As it is at the moment, there isn't much to look at, just a NUC and a mess. I need to get a hold of my old Lego to get further with this. I figure the next step should be some kind of makeshift case for the 7" screen, and probably testing to see if/how it can share USB power source with a keyboard. I do know it can run on 5V, but I'm not sure how many Ampere it. If I can run screen, keyboard and two pointing devices (crappy touch and something more precise) all on one port (with one hub, no external power), that'd let me avoid having three cables to the handheld unit.
Another option might be using a wireless combined keyboard/trackpad and running that and the screen off the same rechargeable battery, but I've yet to find one of those keyboards where the keys are aligned properly (which is of course a big deal in Buzz).
Top

Mozart von Robot wrote: just a NUC and a mess

Mozart von Robot wrote: just a NUC and a mess

Well, you wouldn't be able to see it all in one pic. Technically, it's multiple messes and a lot of it is standing under other things. Also, there's the camera thing.

On top of the base of the gutted laptop I'm using as a monitor, there's a plank of wood (actually a shelf). On top of that, I've got the NUC and a tiny mouse on the right. Cables hanging off the back in a maybe not entirely good for the ports fashion. One USB1 hub dongle thing (for mouse, keyboard, optical drive secondary power) and one cable for the RME Babyface audio interface. On the left, the Babyface and a small audio mixer (for lack of XLR to RCA adapters - awaiting those in the mail). The mixer is standing on top of a broken USB hub strip and a marker pen (looking for something better to put there), to make room for the (still naked) optical drive under the mixer. On top of the mixer, there's a USB2 hub/card reader combo. Cables hanging off that as well. Between the NUC and the mixer is a keyboard and a USB3 hard drive (which is plugged into the NUC).
That's mess number one.

Mess number two is a cardboard box with the 7" screen and controller boards in it. Not much to look at.

Mess number three is just a hollowed out Gamecube chassis. You can pretty much assume what that looks like.

Keyboard update: After a bit of searching on eBay, I found a wireless keyboard/trackpad that's correctly aligned. I obviously couldn't find a Swedish one, but it's an acceptable compromise. Measy keyboard touch pad. The smaller model. 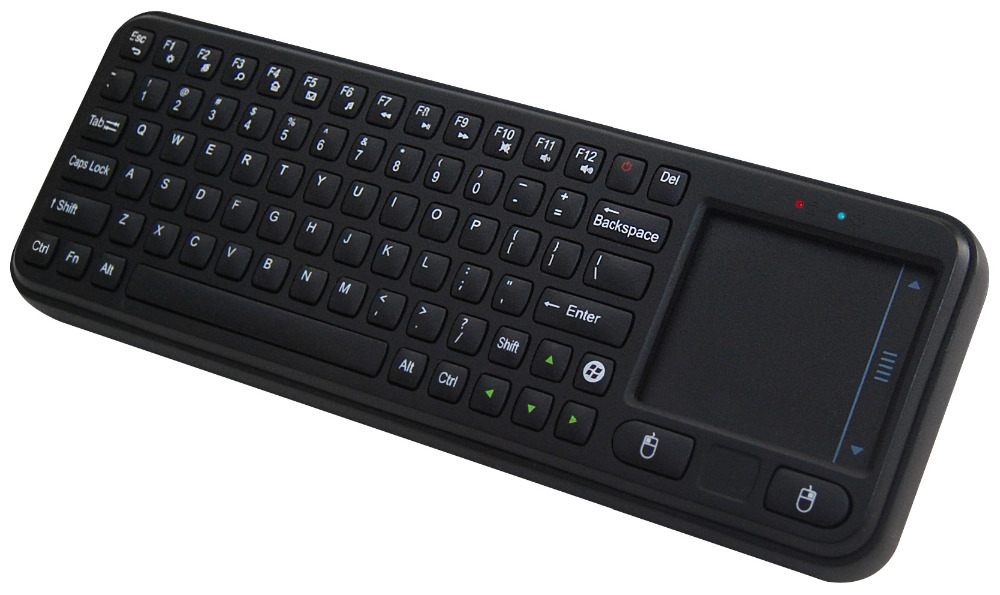 I'd get that for home use if there were a Swedish version. As it is right now, I'm using a full sized Hama keyboard I found dirt cheap at a flea market. The space key is a bit squeaky and the tab key was fucked up, but I ripped off the sleep/wake/power keys (because I hate them with a fiery passion) and put the wake up key where the tab key was (and covered the sleep/wake/power area with a piece of cardboard). I also have a more compact DeltaCo (or is it DelTaco?) keyboard I was using before, but I kept hitting the insert key by accident while typing because it's right next to the left arrow key.

ETA: I just impulse ordered a XBox 360 mini controller. If i can work that into the handheld unit, all the better. Probably not at the lego stage, but maybe later.
Top

I moved things around a bit. Here's a picture of the current makeshift setup:

ETA: Obviously, I have to put the insert key back when using Buzz, but it's really annoying while typing.
Top

AndersBrontosaurus wrote:not sure about portability. raspberry pi 2 I'd said to be able to run some version of win 10 but with several machines running...

Watch out. Every new version of Windows is appx. 1.5x more resource demanding than the previous one, and I don't expect Windows 10 to be an exception despite the usual hype. Windows 7 might be preferable for a small machine.


Mozart von Robot wrote:... all they said was this: "I am sorry we are not able to support since we don’t have this model in your country."

Wow, that answer would have pissed me off.

I've been running Buzz on a Windows XP based eeePc, but it was Atom based (1.7 GHz), and that CPU hates floating point (audio processing), so I wouldn't recommend that for Buzz.
Top

I was following the "potable BUZZ" idea, too.
I found a great free software named CAMEYO, which is designed to make portable versions of installers!

I made a few attempts to install BUZZ on a external USB hard drive.
I worked for VST, but not for BUZZ-generators/effects. The reason is, you can not edit the paths of the machine (like in polac VST), resulting in standard machines only. Adding machines was not possible.
Top
Post Reply
30 posts